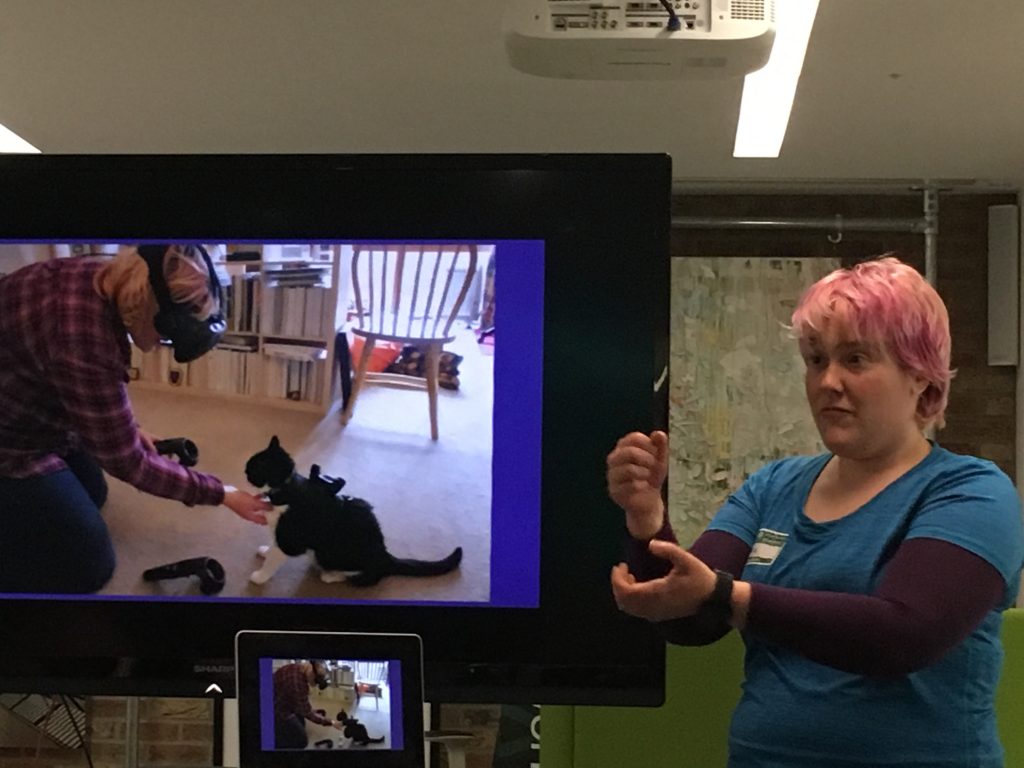 Our pets are unsuspectingly being incorporated into our tech-savvy world… here @Katie_tripixels developed a wearable pet tech device whereby her cats could be detected electronically if they wandered into the field of play during virtual reality games at home. The cats are detected on-screen and therefore any kicks and trips issues are avoided – for both species!

THERE’S no doubt pet tech has an extremely bright future. We pet owners are spending more on our companions than ever before. To some degree this is led by our increasing emotional attachment – even dependence ­– on our cats and dogs for companionship, entertainment, fitness and mental wellbeing. In effect, we are “humanising” our pets to the point where they have become part of the family.

Devices such as GPS trackers for cats and dogs, in-home interactive cameras and even interpretation devices to translate dog language into “human” have been around for a while, but they are not breaking into the mainstream quickly. So, in comes wearable pet tech proper, along with its amazing data-gathering capabilities. After all, the data is what the companies really want – human, animal or other!

According to one report, the global pet wearable market is expected to reach US$2.36 billion by 2022 – time to sit up and take note, whether you are a venture capitalist looking for the Next Big Thing to invest in or have an idea brewing about what tech will make Fido’s life even more complete.

The trend for wearable tech has spread from adults to babies and on to our pets and we can now monitor all family members to within an inch of their lives. The days of choosing just a pet treat or toy have been replaced by making sure our four-legged friends enjoy the same tech-based services and consumables as we do. Concurring with this trend is Jim Cramer, American investment guru and Mad Money presenter, who has expressed the view that “the humanisation of pets is the greatest investing opportunity out there”.

By humanising our pets, we treat them more like ourselves – basically, treating pets as children or family members. Many services and products entering the pet market now are directly reminiscent of human ones, and will be directly appealing to the owner first and foremost. And pet owners have become highly receptive to buying such products.

Interestingly, estimates in the US suggest that one in three pet owners is a Milennial and tech-savvy owners will naturally mean tech-savvy pets. Our companion animals are benefiting in the most part from pet tech developments, in the form of longevity from better nutrition, advanced veterinary care and behavioural awareness, but they can rarely rise to the emotional expectations that are being placed on them, with or without technology to assist them!

This is no deterrent to venture capitalists and investors, though, as according to CB insights, funding of US pet tech startups is increasing rapidly, having grown from US$37 million in 2012 to US$154 million in 2016, with early stage investment (seed/angel and series A) accounting for around 75% of all pet tech deals in 2016. The startups that venture capitalists are chasing after range from social media networks, dog treat box subscriptions and DNA kits, to wi-fi enabled dog crates and “fitbits” for pets.

But with the weight of expectation hanging heavily over our unsuspecting furry companions, it might be time to keep an even closer eye on their health and welfare, and a UK tech company has developed a device that should do just that job.

Felcana is designed by vets and is described by its makers as “more than a fitbit for dogs”. The device, attached to a pet’s collar, will collect data about both an animal’s behaviour and its activity on a constant feedback loop. The data is fed into an app and can be monitored by the owner on their smartphone, as well as by participating veterinary practices, to generally monitor health and aid early warning of any health conditions for the pet.

According to the company, Felcana can “not only help you and your pet reach your fitness goals, but subtly monitor your pet’s health and routine, throughout their whole life, and let you know when things change.”

Sounds amazing, and with the price tag starting at £99 and lots of spin-off products already developed – collars, leads, extra detector beacons, this is just the tip of the iceberg. It looks like pet and vet tech is an area truly set to spread like wildfire… or fleas on a warm summer’s day… now then, if someone could invent some tech to solve that little issue I’d be the first in the queue!

While vets themselves are slowly having to adapt to a more technologically based way of practising their art and science, it may not be them who lead the pet tech charge. It could well be that pet owners, and even those totally outside the vet profession, take the bull by the horns, the tiger the by the tail or the dog by the lead, and get those innovative pet tech products and services in front of the public’s eye early on.

If you’re conducting research into pet tech, or anything else, you may be interested in reading about R&D tax credits.