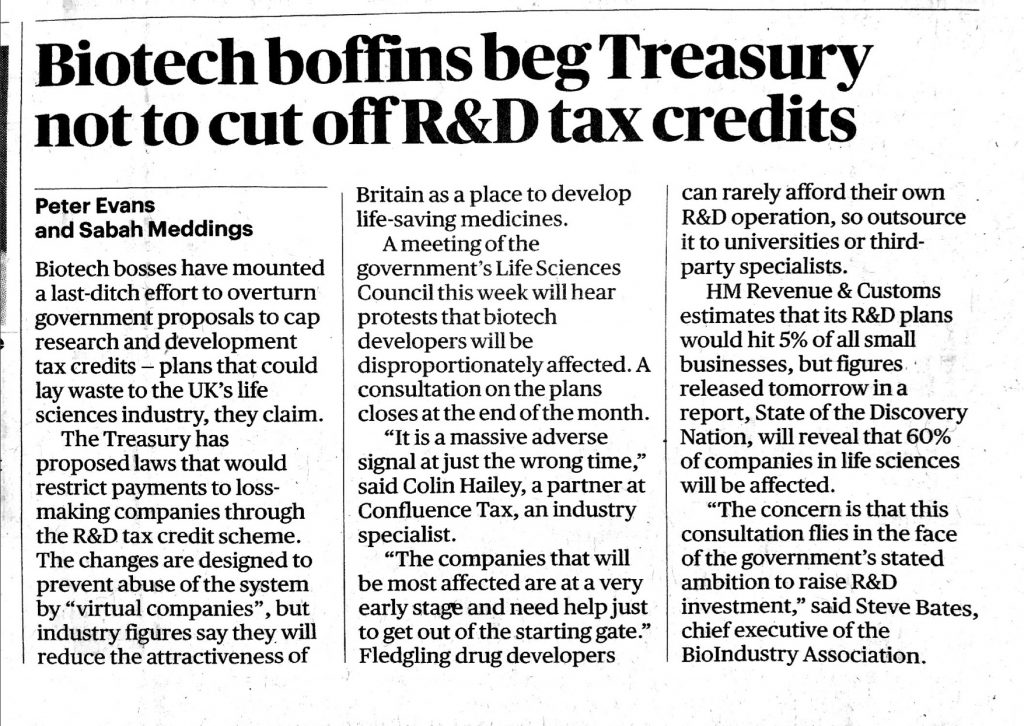 HM Treasury has consulted on its plans to introduce a cap on R&D tax credit cash claims – of three times a company’s PAYE and NI. And the biotech sector has responded with a resounding “What the…!”

The consultation does propose some refinements, such as the ability to include the PAYE and NI of other group companies, and a possible threshold whereby the smallest claims are not affected, but the impact of this proposal on the biotech sector is clear.

Our concerns are that this cap hugely restricts the size of cash claims for claimants with large amounts of subcontractor or outsourced spend, which is particularly common in the life sciences industry. Confluence Tax did its own mini-consultation of biotech companies, which revealed that of around 60 claims, 60% will be affected by the cap.

The Treasury’s reason cited for the cap is to prevent fraudulent claims, or tax avoidance structures involving claiming tax benefits in two countries at once. Given the existing robust laws and HMRC’s procedures already in place to tackle such behaviour, why is the very blunt instrument of a cap being introduced, when it damages perfectly legitimate claims?

Surely what we need is a targeted anti-avoidance approach from HMRC rather than a blunt instrument that will damage legitimate businesses with legitimate claims.

In our response to the consultation we focused on two key issues:

To make our position clear, Confluence Tax is, along with the BIA and other bodies, lobbying to get a more nuanced cap introduced, if indeed such a cap needs to be introduced at all. As we see it, it is somewhat bizarre to have a Government that promotes a strong Life Sciences Industrial Strategy aimed at boosting the sector BUT a Treasury imminently introducing a measure that swipes a large chunk straight back out of this incentive.

The cap will be introduced for accounting periods beginning April 1, 2020 onwards (from 2021 for those with December year ends).

If you would like to have your voices heard, please let us have your comments and we can include them in our discussions going forward with the Treasury, on an anonymised basis if you prefer. Your strongest language would be welcome! Unlike HMRC, we do not have a profanity checker and we love learning new words.